Emery Down is a small hamlet clustered around a hilltop overlooking Swan Green and Lyndhurst. In 1379 it was known as Emerichdon, and in 1490 as Emeresdowne - the name probably referred to land belonging to the Emery family.
Admiral Frederick Moore Boultbee, was a significant Emery Down benefactor, who in 1856 settled in the village with his niece Charlotte. 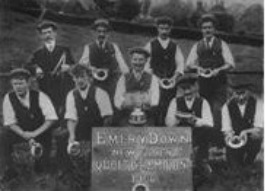 Born in 1798, the Admiral had a long naval career, including in 1825 distinguishing himself during action in suppression of the slave trade. Opposite the old Village school between the church and the New Forest Inn, are five alms houses built in 1871 for the benefit of elderly people of the parish, named in his honour. Christ Church at the far end of Silver Street, was designed by William Butterfield and built by Hillary’s of Andover. It was placed on a small hill on ground granted by the Crown and consecrated in 1864 when Moses Blake, who lived in Silver Street, became the first Sexton and Parish Clerk. A photo of Moses and his family outside Merton Cottage, very close to where the telephone kiosk is, is shown below. Moses’ daughter Jane took over from him as Sexton and Parish Clerk when he retired in 1882 and like her father, completed 50 years’ service. Various people have recorded their memories of previously living or visiting our village, include those recorded on the Francis Firth website:"At the outbreak of the Second World War in 1939 I was evacuated to Emery Down from Portsmouth. I was billeted with a very nice couple who lived in a cottage quite close to the church. I was soon invited to join the choir, together with the other evacuees. It is a beautiful little church situated at the edge of the forest adjacent to the village green. My abiding memories will always be the simple sanctity of the services and the pervading perfume of the honeysuckle that surrounded the churchyard" - Alan Evans. "We used to have to walk up the hill and visit my great grandmother who lived in Silver Street in Emery Down. We used to stop half way up and sit on an old bench. Opposite my great grandmothers house (Ship Cottage) was an old well that was boarded over and my sister and I would always wonder what it would have been like having to get your water from a well. We always used to pop along to the local post office stores in Silver Street and buy our tea. Usually we had fish fingers and always a block of Neapolitan icecream which was in a cardboard box" - Wendy King. 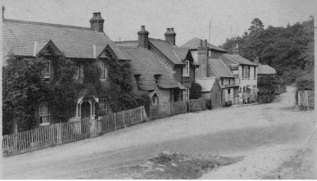 This old photo shows the entrance to Silver Street and is identical to the scene today, apart from Merton Cottage (the second building) is now tiled, rather than thatched.Silver Street is thought to be a corruption of Silva, meaning ‘the road to the woods’. The Census of 1841 includes details of the inhabitants of 15 properties in the street, the majority being agricultural labourers, although there is also a gardener, a char-woman, a journeyman tailor and a journeyman carpenter and at least one Charcoal Burner. Every cottage is somehow unique with their own names such as Clematis Cottage, Ship Cottage, Honeysuckle Cottage, Christchurch Cottage, Wisteria Cottage, Charcoal Cottage and Merton Cottage as examples.   This photo shows Moses Blake, sexton to the local church and parish clerk outside the Cottage on his 91st birthday. He died in 1919. 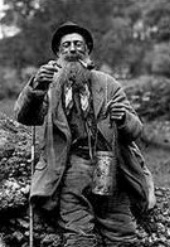 Harry 'Brusher' Mills (1840 - 1905) was the legendary snake catcher of the New Forest and was born in Silver Street. He was usually armed with a flat pair of scissor like instruments or tweezers in his button hole which he used to hang the snakes on and a forked stick he called his 'staff of office'. It is estimated that he caught tens of thousands in his lifetime, though nobody knows how many times he was bitten.
The Village Post Office (opposite the telephone kiosk) opened in 1885 and continued alongside a shop in the same building, until 2008. In 1909 Bertie Pardey, a local grocer, was appointed Sub-Postmaster in Emery Down. Pardey’s granddaughter remembers:  "As you entered the shop the long wooden Post Office counter was on the left. There was a panelled desk for paperwork behind. Straight ahead of the door were long shelves of loose sweets, Sherbet Lemons, Mint Humbugs and Liquorice Toffees were favourites. These all were sold loose and had to be weighed out in ounces and quarter pounds on the shop scales. During the war and until 1953 sweets were rationed so they were not always available." 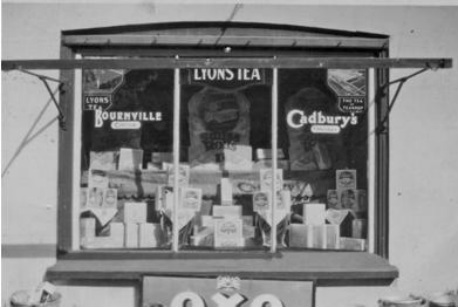